(Not necessarily in that order) 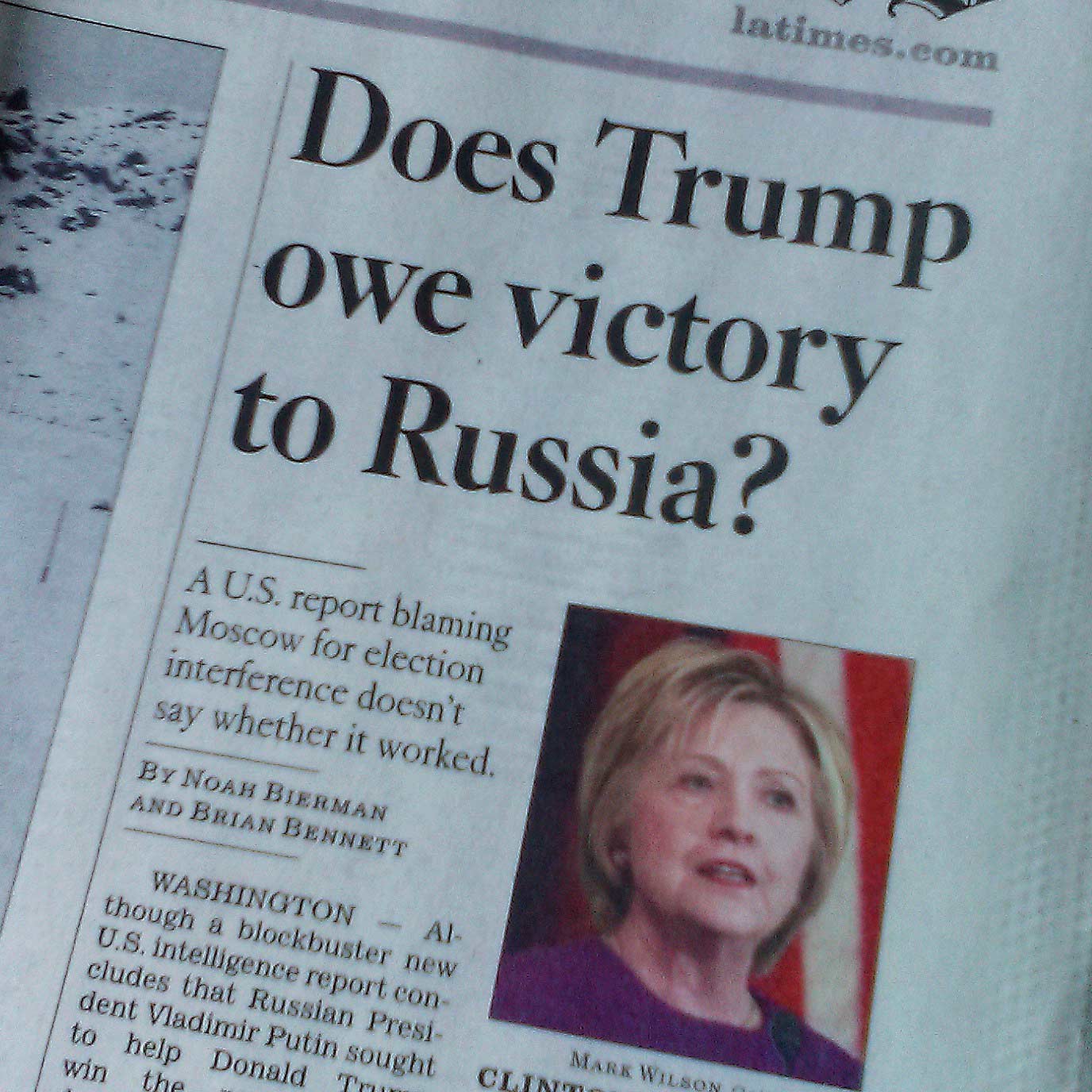 Not in the obvious way.

Article asks “whether Moscow’s covert cyberhacks and other activities made a difference in Trump’s upset victory over Hillary”?

Did we even get the right candidates?

“Putin’s most tangible victory may have come last summer.”

“emails posted on WikiLeaks showed that supposedly neutral DNC officials had backed Clinton over her rival, Vermont Sen. Bernie Sanders, in the primaries.”

As hacking was underway before the primaries, we might've seen different and better options on our ballot without Russian interference. 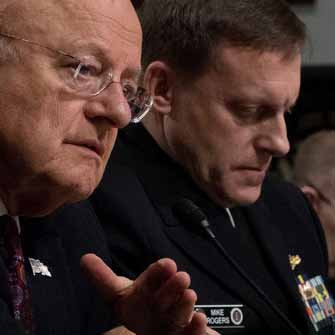 An Assault on Democracy 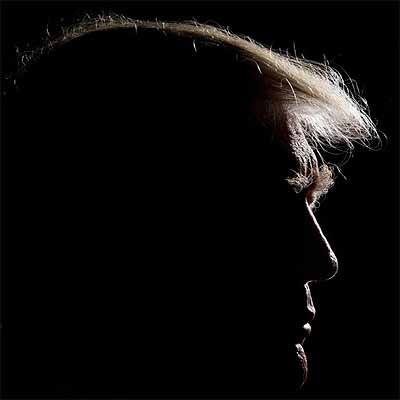 Trump, Putin, and the Big Hack 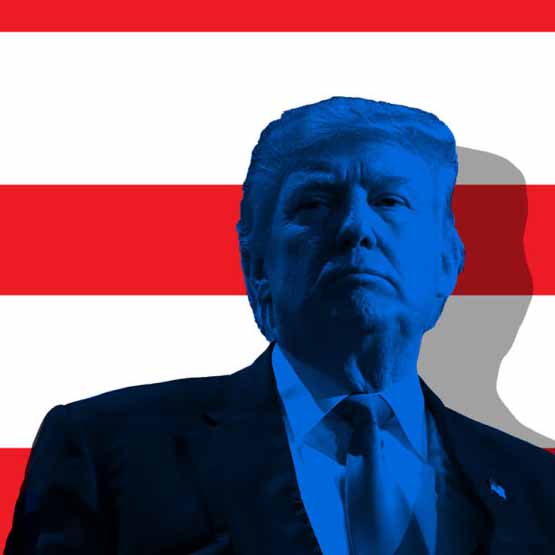 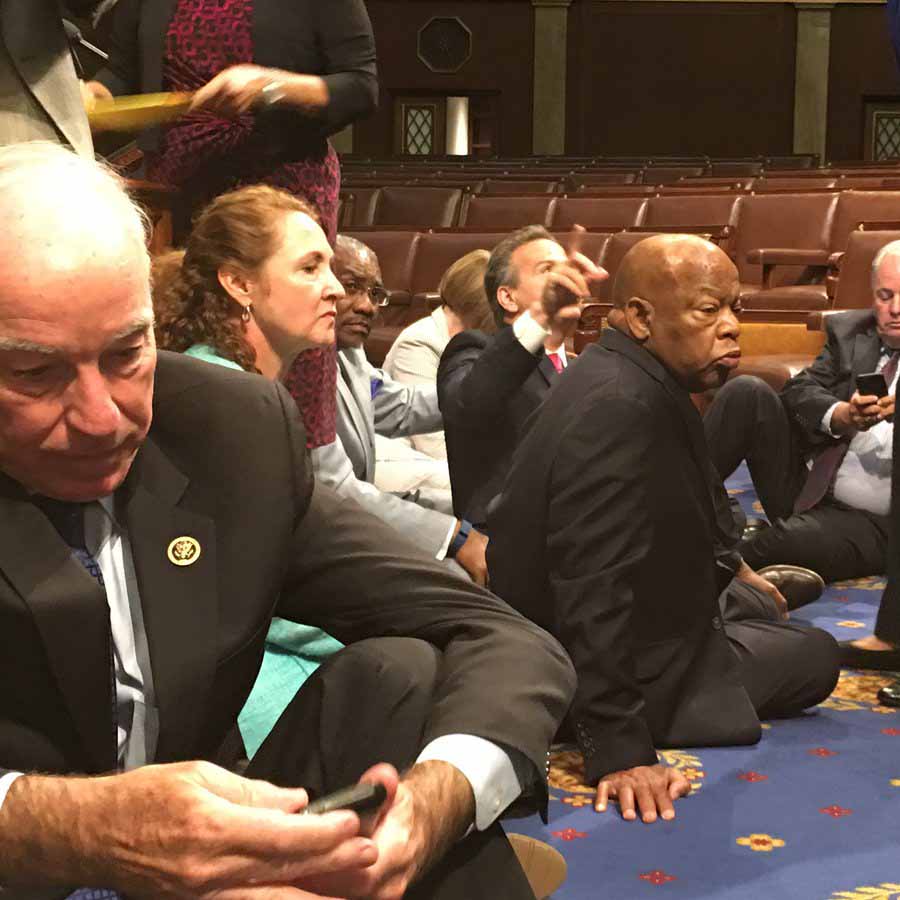 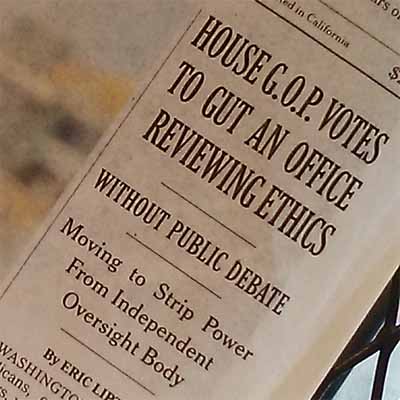 Ok they backed-off, but still. 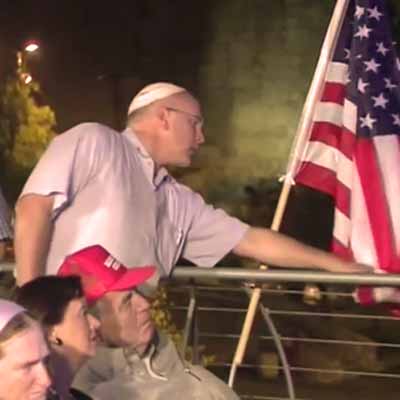 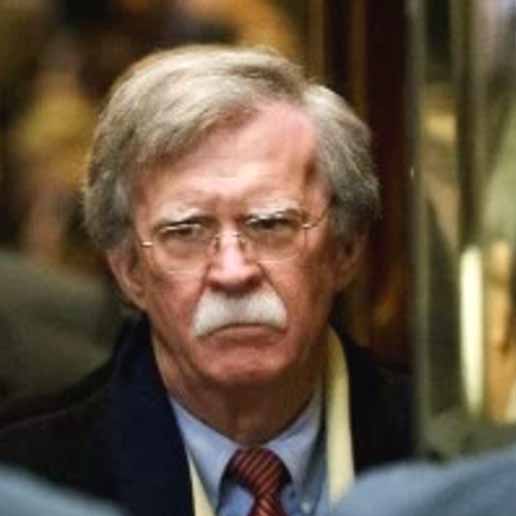 (no really)
Imagine when he sees ours. 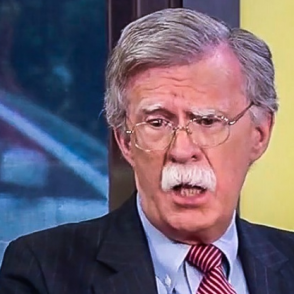 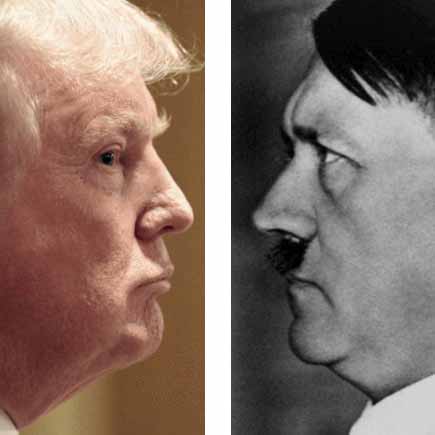 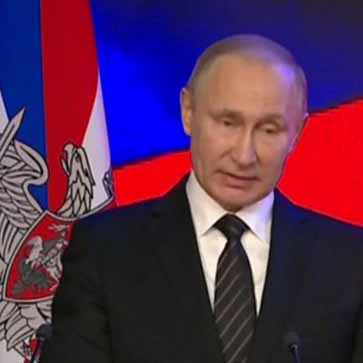 Nothing unsettling to see here. 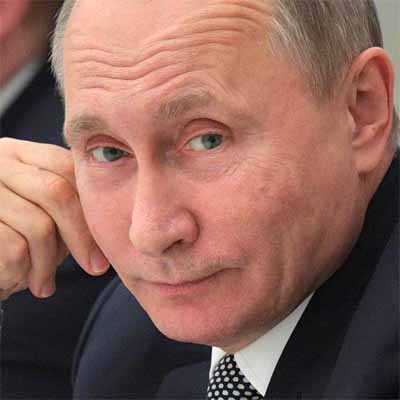 Believe what you will. 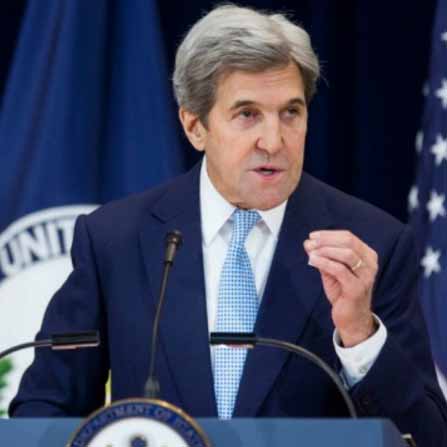 Dangerous for Trump to Undo Sanctions

But Russia has his puppet strings. 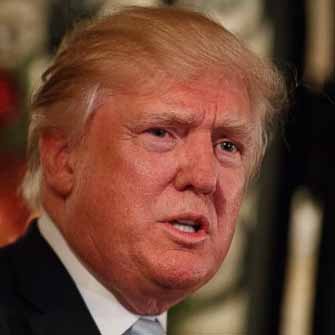 Trump in Bind Over Russia 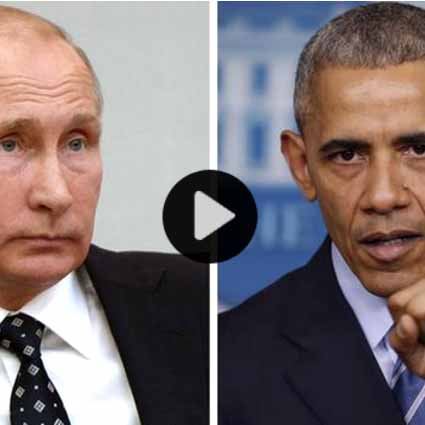 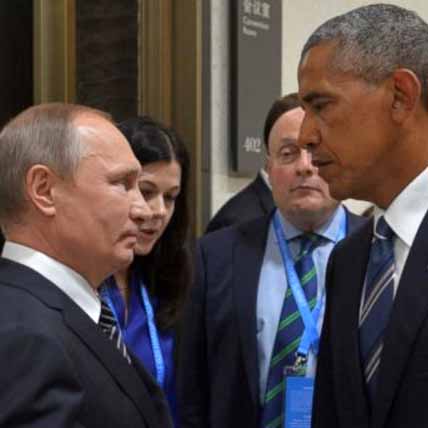 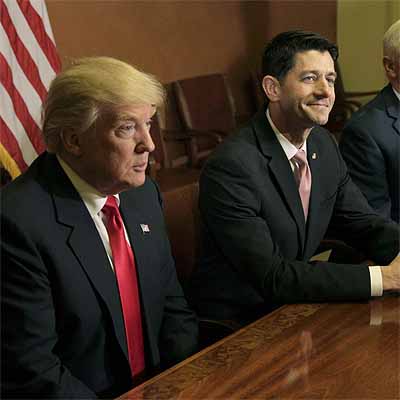 He conned voters. Who knew? 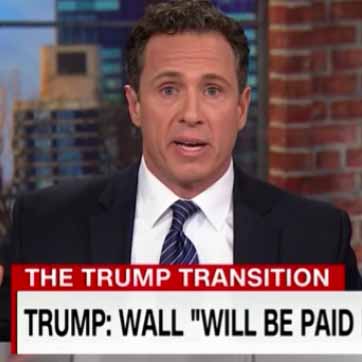 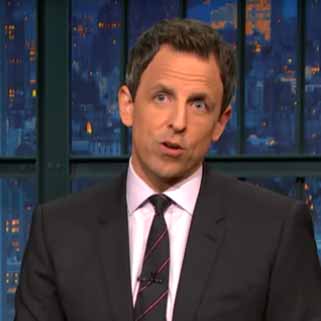 Too soon to laugh? Still funny. 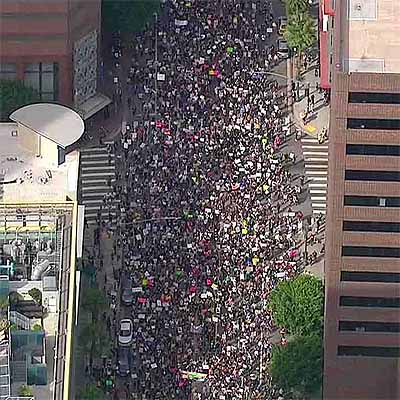 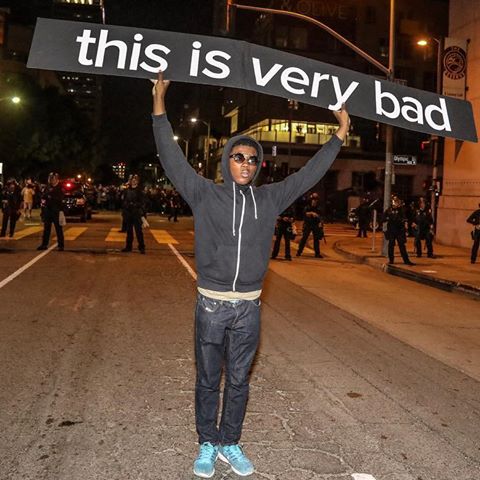 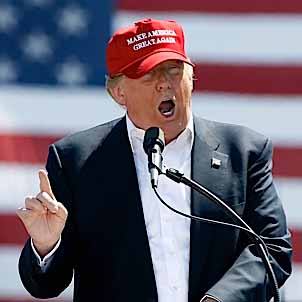 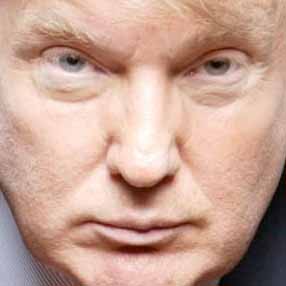 Breaking it down in detail. 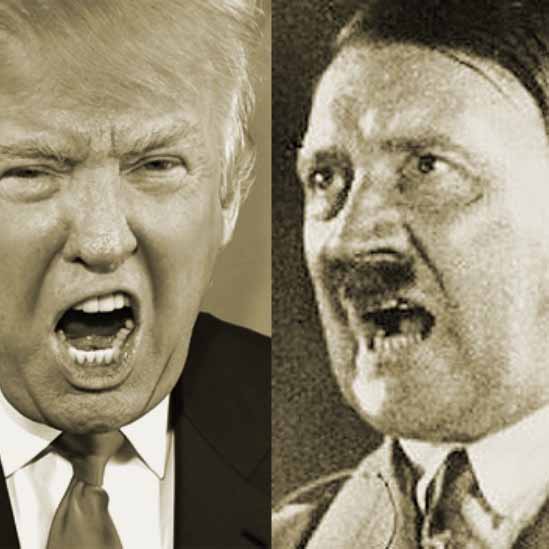 Mexican is the new Jewish. 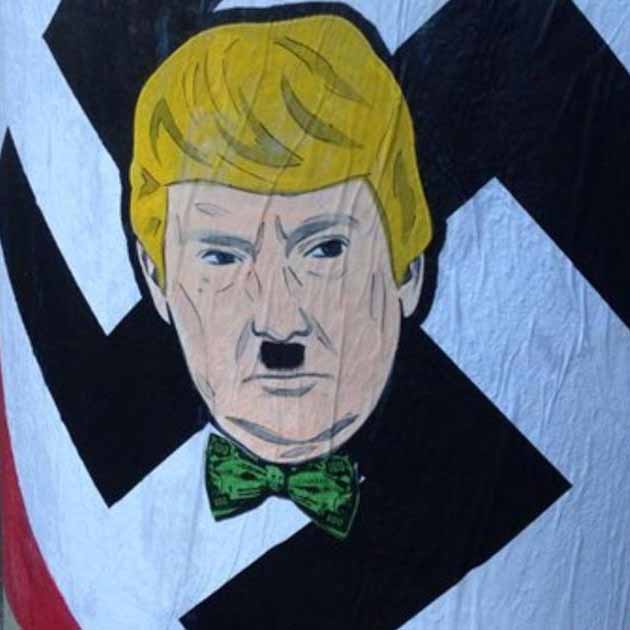 Comparisons to Hitler with Artistic License

All the above are linked out to 3rd-party independent sources.
But inquiring minds want to know; what do we think is really going on?

Here's our unofficial viewpoint: Trump is too huge of a buffoon to game this election for his own benefit. He doesn't have deep enough pockets or enough influence to manage all the influencers & party officials who'd make or break a political career.

But The Russians, they could pull this off. They would have an almost inexhaustible supply of both money and manpower. Not just hackers, but spies and blackmailers and extortionists and mobsters, and sweet looking girls who like to keep politicians happy ...for a price. Just a little favor here and there.

No they didn't hack the results of the polling (which showed Hillary won the popular vote by about 3 million) or the electoral process itself. What they did was far more subtle and insidious.

They removed our best candidate.

See, I'm not saying Hillary should have won. No, what I am saying is that we were presented with the 2 worst-possible options ever seen in American election history, for one very powerful reason. The Russians wanted it that way.

They found the leverage to manipulate the Democratic Party via miscommunication, misdirection, and false results during the primaries, so Bernie would be forced out.

They knew Bernie couldn't be bought; whereas Hillary or Donald would sell their souls for money. The Republican party had already splintered, collapsed on itself, and selected a reality-TV moron as their frontrunner. All that remained was to trash the Democrats.

What's the motive? Surely Putin didn't plan to invade, or take over America itself. No no no. Nothing so blatantly obvious. But Putin has demonstrated an interest in reclaiming lost territory, starting with the Ukraine and the annexation of Crimea.

Back in December 1991 the Soviet Union was pulled apart, to form the Baltic States and the Commonwealth of Independent States. Ever since then, Russia has struggled to recover its economic status, its position at the forefront of science & exploration, its role as a superpower, and let's not forget, its lands.

Russia would like nothing better than seeing a total flake elected to our nation's highest office. Then America could just step aside while Russia dominates the other side of the globe. Not our backyard, not our problem. We're sick of fighting other people's battles anyhow.

Assuming it's a foregone conclusion that we've been pwned by the Russians, what next?

Well first, a tip of the hat. Well played Russia.

Next a damage assessment. We just totally wasted several Billion dollars on a pointless election between fake candidates.

Then, damage control. We cannot really accept an impostor forced on us by a foreign power. We need to reset the election, choose genuine candidates, and have a new vote where the choices on either side are "of the people, by the people, for the people".

Let's choose ANYBODY other than Donald & Hillary. And start fresh from there.

Like, you know, Bernie maybe. And a worthy opponent, for conformance to tradition. I like Chuck Hagel. Either of these very different candidates would tick my boxes for human decency, rational thought, and leadership potential. Qualities sorely lacking in November of 2016.

Also, next time our intelligence community informs us that the election process has been tampered with, let's not declare any winners until we learn the extent of the breach. Honestly! What kind of willfully-ignorant purely stubborn nonsense was that? Oh, I see... It was the people's way of saying "anybody but Obama" during the interim. Okay okay okay, whatever.

Well for all his shortcomings, Obama is at least well-seasoned enough to recognize what's happening in realtime... whereas Trump still wants to pretend the Russians had no measurable impact on the election result. Because he wants to believe he won fair & square, while it's clear he didn't.